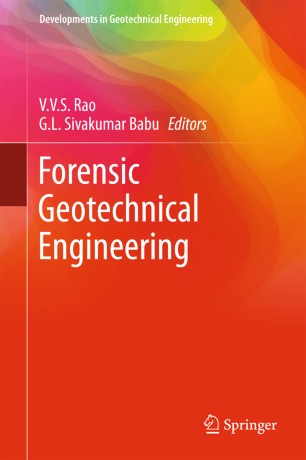 Part of the Developments in Geotechnical Engineering book series (DGE)

In this edited volume on advances in forensic geotechnical engineering, a number of technical contributions by experts and professionals in this area are included. The work is the outcome of deliberations at various conferences in the area conducted by Prof. G.L. Sivakumar Babu and Dr. V.V.S. Rao as secretary and Chairman of Technical Committee on Forensic Geotechnical Engineering of International Society for Soil Mechanics and Foundation Engineering (ISSMGE). This volume contains papers on topics such as guidelines, evidence/data collection, distress characterization, use of diagnostic tests (laboratory and field tests), back analysis, failure hypothesis formulation, role of instrumentation and sensor-based technologies, risk analysis, technical shortcomings. This volume will prove useful to researchers and practitioners alike.

V.V.S. Rao is an internationally acclaimed Geotechnical Consulting Engineer and is the founder of M/S Nagadi Consultants Pvt. Ltd. a leading Geotechnical Consultancy firm in India. His major field of specialization is soil dynamics including machine foundations and earthquake geotechnical engineering. He has been involved in over 20,000 major to medium sized projects. He was an adviser to NTPC and also to UNDP. He has been an active member for over 40 years in the Geotechnical Committees of the Bureau of Indian Standards. During 1966-1971 he headed the Soil Engineering Section of the Indian Institute of Technology Delhi and guided a number of research projects, in addition to conducting postgraduate programs under USAID, and consultancy jobs.

During 1993-1997 he was the secretary and during 1997-2001 the Chair of ISSMGE Technical Committee, TC20 on Professional Practice. In 2001 he introduced the subject of Forensic Geotechnical Engineering at Indian Institute of Technology, Kanpur, India. His first paper on the same subject was presented in the International Workshop on Foundation Design Codes held at Kamakura in Japan in April 2002. He became the Chair of TC on Forensic Geotechnical Engineering, TC 40 during 2005 – 2009. This committee was designated as TC 302 in 2009. He continued to chair this TC until 2013.

Under his leadership a number of International Seminars/Workshops on Forensic Geotechnical Engineering have been organized between 2005-2013. He has chaired and delivered special lectures in more than eight international conferences and workshops. He also has over 40 published papers in international journals and conferences. He has received seven national awards in India, including a special award by M/S Torsteel Research Foundation, and from Association of Consulting Civil Engineers as also from Indian Geotechnical Society for his significant contribution in Geotechnical Engineering.

He has written a book on soil reinforcement and geosynthetics, edited six books and proceedings and has over 200 publications in journals and conferences to his credit. He received several awards and honors for his work for his work. He received the best PhD thesis award in geotechnical engineering in India by the Indian Geotechnical Society in 1992. He is a Humboldt Fellow and a DST Boyscast Fellow and a recipient of several best paper awards for the papers published in ASCE journals and journals and conferences of Indian Geotechnical Society.