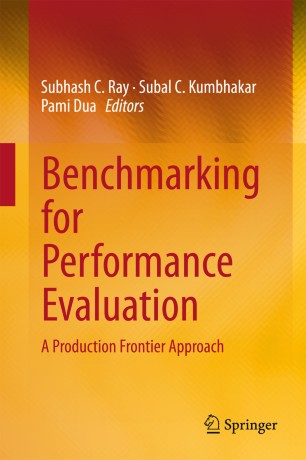 This book provides a detailed introduction to the theoretical and methodological foundations of production efficiency analysis using benchmarking. Two of the more popular methods of efficiency evaluation are Stochastic Frontier Analysis (SFA) and Data Envelopment Analysis (DEA), both of which are based on the concept of a production possibility set and its frontier. Depending on the assumed objectives of the decision-making unit, a Production, Cost, or Profit Frontier is constructed from observed data on input and output quantities and prices. While SFA uses different maximum likelihood estimation techniques to estimate a parametric frontier, DEA relies on mathematical programming to create a nonparametric frontier. Yet another alternative is the Convex Nonparametric Frontier, which is based on the assumed convexity of the production possibility set and creates a piecewise linear frontier consisting of a number of tangent hyper planes.

Three of the papers in this volume provide a detailed and relatively easy to follow exposition of the underlying theory from neoclassical production economics and offer step-by-step instructions on the appropriate model to apply in different contexts and how to implement them. Of particular appeal are the instructions on (i) how to write the codes for different SFA models on STATA, (ii) how to write a VBA Macro for repetitive solution of the DEA problem for each production unit on Excel Solver, and (iii) how to write the codes for the Nonparametric Convex Frontier estimation. The three other papers in the volume are primarily theoretical and will be of interest to PhD students and researchers hoping to make methodological and conceptual contributions to the field of nonparametric efficiency analysis.