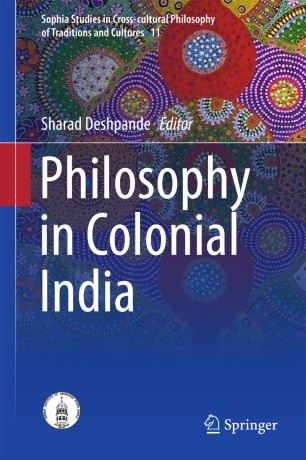 Part of the Sophia Studies in Cross-cultural Philosophy of Traditions and Cultures book series (SCPT, volume 11)

This volume focuses on the gradual emergence of modern Indian philosophy through the cross-cultural encounter between indigenous Indian and Western traditions of philosophy, during the colonial period in India, specifically in the 19th and early 20th centuries. This volume acknowledges that what we take ‘Indian philosophy’ or ‘modern Indian philosophy’ to mean today is the sub-text of a much wider, complex and varied Indian reception of the West during the colonial period. Consisting of –twelve  chapters and a thematic introduction, the volume addresses the role of academic philosophy in the cultural and social ferment of the colonial period in India and its impact on the development of cross-cultural philosophy, the emergence of a cosmopolitan consciousness in colonial India; as also the philosophical contribution of India to cultural globalization.

The issue of colonialism and emergence of new identities in India has engaged the critical attention of scholars from diverse fields of inquiry such as history, sociology, politics, and subaltern studies. However, till today the emergence of modern Indian philosophy remains an unexplored area of inquiry. Much of the academic philosophical work of this period, despite its manifest philosophical originality and depth, stands largely ignored, not only abroad, but even in India. This neglect needs to be overcome by a re-reading of philosophical writings in English produced by scholars located in the universities of colonial India. This edited volume will facilitate further explorations into the presence of colonial tensions as they are visible in the writings of modern Indian academic philosophers like  B. N. Seal, Hiralal Haldar, Rasvihary Das,, G. R. Malkani, K. C. Bhattacharyya, .  G. N. Mathrani and others.

Adoption and assimilation of European philosophical tradition Brajendranath Seal and Hegelian dialectics Colonialism and its impact on the conception of philosophy G.R. Malkani and rendering of Advaita Vedanta Indian response to colonial science and technology K.C. Bhattacharyya and Kant Philosophy and self-knowledge in colonial India Philosophy of science in colonial India Reconstruction of Hindu ethics Reinterpretation of indigenous philosophical concepts Tagore and nationalism in philosophy Traditional forms of knowledge and colonialism