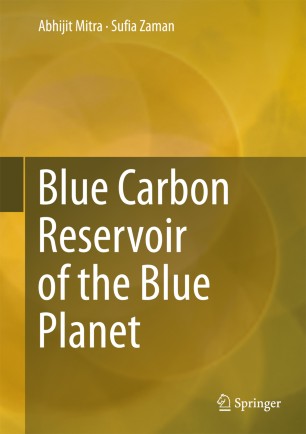 The ever increasing emission of carbon dioxide due to rapid industrialization, urbanization, unplanned tourism and alteration of land use pattern is causing unprecedented changes to marine biodiversity. Irrespective of political philosophy, nation, caste, sex and religion, mankind is under the appalling shadow of climate change. Today nature-based approaches for the mitigation of climate change are increasingly accepted as part of the low-cost solution. Thrust has been given by several scientific communities to assess the magnitude and viability of carbon sequestering potential of plants. Coastal producer communities like mangroves, salt marsh grass, sea grass beds, and seaweeds absorb atmospheric carbon dioxide during the process of photosynthesis. This carbon known as the ‘blue carbon’ is thus associated with the marine and estuarine ecosystems. However, a number of gaps in our scientific knowledge on blue carbon domain still exist. Molluscs, coral reefs, phytoplankton, which are amongst the important storehouses of carbon, have not been addressed. Very few scientific studies on the carbon stored in these valuable natural vaults have been performed, and no data bank is available on their carbon sequestering capacity on global basis.

The methodologies for assessing blue carbon stock also need further standardization so that credit from blue carbon reservoir is accepted by the International bodies in the form of a concrete policy. It is a matter of great appreciation that Conservation International (CI), the International Union for Conservation of Natural Resources (IUCN), and the Intergovernmental Oceanic Commission (IOC) of UNESCO is collaborating with governments, research institutions, non-governmental and international organizations, and communities around the world to develop management approaches, financial incentives and policy mechanisms for ensuring conservation and restoration of blue carbon ecosystems and implement projects around the world that demonstrate the feasibility of blue carbon accounting, management, and incentive agreements.

The present book has critically presented the data bank for each community of blue carbon not merely in the form of text description, but also through case studies that are the outcomes of research projects and pilot programmes.