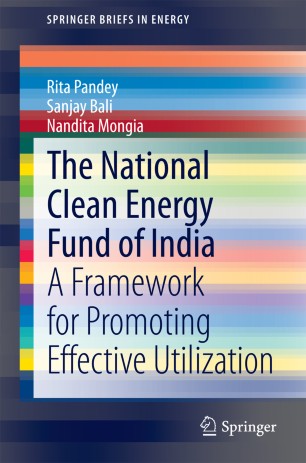 A Framework for Promoting Effective Utilization

The National Clean Energy Fund (NCEF), announced in the Government of India’s Budget 2010-11, is seen as a major step in India's quest for energy security and reducing the carbon intensity of energy. Funding research and innovative projects in clean energy technologies, and harnessing renewable energy sources to reduce dependence on fossil fuels constitute the objectives of the NCEF. The NCEF’s utilization of funds is considered to be rather low and disbursements poorly aligned with the fund’s stated objectives, thus posing a potential risk of diluting the focus of NCEF with adverse implications for the much-needed research and innovation in the clean energy sector in India.
The book provides a detailed framework for promoting effective utilization and administration of NCEF. To this effect, it identifies the most promising avenues for utilization of NCEF resources for catalytic opportunities and deployment of new technologies. It also identifies and prioritizes the specific energy sub-sectors towards which the NCEF resources are directed. It also makes suggestions for designing a smart monitoring and evaluation framework for the NCEF.
This work provides significant information for the government so that appropriate mid-course corrections may be made in a timely manner. This will also be useful in honing the strategic thinking on a suitable energy-technology policy and an assessment of technology needs and other barriers to the clean energy sector in India.