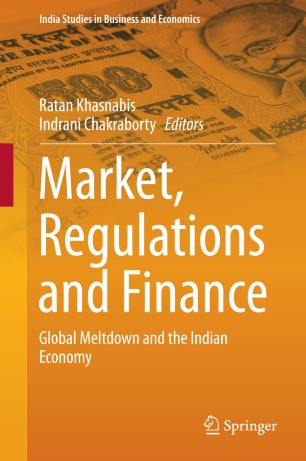 Global Meltdown and the Indian Economy

This volume’s primary contribution to the field of economics is that it addresses the issue of inter-linkages between money, finance and macroeconomics with a broad analytical perspective that has commonality with the Post-Keynesians. In an attempt to assess the consequences of economic reforms and the fallout of the global financial crisis for India and the world around, the book argues that with the onset of the crisis, as in most advanced economies, debates and discussions in India were concerned with three main issues: monetary policy and asset prices, financial stability, and macro-prudential regulation.

Three related issues which are also considered important in the Indian context are rule vs. principle-based supervision, integrated financial supervision, and regulatory and supervisory independence. The book argues that the crisis highlighted the inadequacies of macro-prudential regulatory structure, which mainly addresses idiosyncratic risks specific to individual financial institutions. The crisis sparked off an extensive debate on the role of national regulatory and supervisory authorities in crisis prevention and crisis management as a result of macro-prudential regulations, which involve a general equilibrium approach to regulation aiming at safeguarding the financial system as a whole. The book then argues that the crisis led to a paradigm shift in macroeconomic theory and policy. This shift has been categorized into four specific areas: monetary policy, financial regulation, corporate governance, and globalization. The book analyses how the characteristics of each of these four categories have changed from the pre-crisis to the post-crisis situation. The book also closely examines the phenomenon of rising global commodity prices post-crisis. The book also deals with an analysis of the impact of this crisis on employment in the US economy by simulating a macroeconomic model developed by the Cambridge Department of Applied Economics in the 1980s.