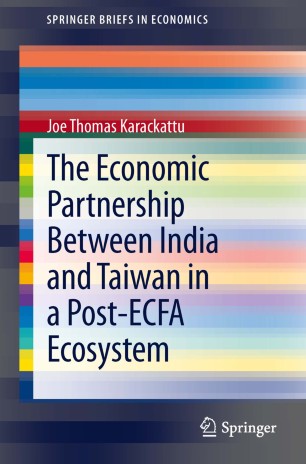 The partnership between India and Taiwan is situated in a virtual maze of complex political factors. Given the core issue of contestation of Taiwan’s political status in world affairs and India’s adherence to the “One China” policy, the relationship remains a fragile one for both partners. In recent years, Taiwan has signed the Cross-Strait Economic Cooperation Framework Agreement (ECFA) with Mainland China. Increasingly, its political and economic future (including its relationships with countries such as India) will continue to be linked with Mainland China.

This book closely examines the partnership between India and Taiwan within the new post-ECFA setting that Taiwan finds itself in. It explicates the shifts and continuities in Taiwan’s economic relationship with Mainland China, discusses how partnership with India could become a crucial pivot of Taiwan’s foreign policy in the coming years, and argues why this partnership is vital for the “take-off ” of India’s own economic growth targets. The book identifies specific avenues for India and Taiwan to benefit from the economic growth success stories that they have come to represent over these years and outlines policy realignments that could allow India and Taiwan to best realize their mutuality of interests.

Dr. Joe Thomas Karackattu is presently a Research Fellow at the Indian Council of World Affairs (ICWA) in New Delhi. He is a former Fox Fellow (2008-09) at Yale University, USA, a recipient of the “President’s Award” for 2010-11 at the Institute for Defence Studies and Analyses (IDSA) in India, and of the “Taiwan Fellowship” award in 2012 (National Chengchi University, Taipei). His academic background is in Economics (BA (Hons); St. Stephen’s College, Delhi) and International Relations (MA, MPhil and PhD; Jawaharlal Nehru University, Delhi). His chief research interests include China’s foreign and economic policy, Cross-Strait ties, democratization and economic development in Taiwan, and Sino-Indian relations. He has presented his research on these domains at Oxford University (UK), East-West Center (USA), The Graduate Institute (Switzerland), mainland China (The University of Nottingham Ningbo, Xiamen University, Guangxi Academy of Social Sciences, Jinan University, among others), Taiwan (National Chung Cheng University; National Dong Hwa University; National Chung Hsing University, National Cheng Kung University & Institute of International Relations (IIR), National Chengchi University (NCCU)). His research can be found in Journal of Contemporary China, Issues and Studies, China Public Administration Review, South Asian Journal, Biosecurity and Bioterrorism, South Asian Studies Quarterly and China Report, among others. Apart from working in an academic/policy-research setting, he has also worked with both development and mainstream media in South Asia [print and television].