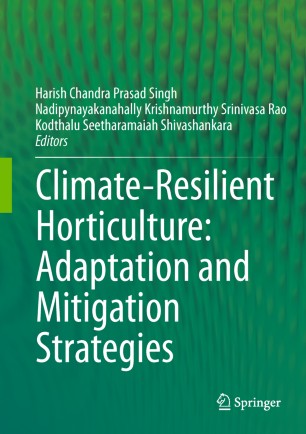 Climate change, a global phenomenon, has attracted scientists to contribute in anticipatory research to mitigate adverse impacts, which are more important for horticulture, considering that the scenario is in the midst of revolution, reaching the production level of 250 million tonnes in India. Impacts of climate variability have, invariably, profound influence on production and quality. An understanding of the impacts and relevant adaptation strategies are of foremost importance to sustain the productivity and profitability of horticulture crops in the climate change scenario, which necessitates synthesis of current knowledge to develop strategies for adaptation and mitigation to achieve climate-resilient horticulture. The book Climate-resilient horticulture: adaptation and mitigation strategies addresses the effects of climate change on different horticultural crops and focuses on the adaptation strategies based on the scientific knowledge generated by the experts in different agro-climatic regions in India. Issues have been covered in various chapters to make this book a treasure of knowledge in horticulture vis-a-vis climate change. Some of the crops included in the book are apple, grapes, cashew, banana, litchi, mango, coconut, oil palm, potato, tomato, cucurbits and flowers. In addition to strategies to be adapted in these crops, various other important aspects like carbon sequestration, pests and diseases, and urban landscaping are also covered in the book. Information on climatic risks and adaptation options for resilience in horticultural crops and future strategies and information on pest and disease dynamics on horticultural crops in relation to climate change and available mitigation strategies have also been documented. The book is edited by Dr H P Singh, a visionary leader, and his colleagues, which will be highly valuable to research workers, students, policy planners and farmers to understand and checkmate the adverse effect of climate change, so as to convert weakness into opportunity.