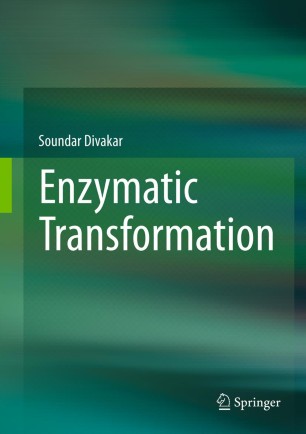 Transformations using enzymes have been extensively investigated in the last two decades and the results promise great potential for this growing field, especially in the area of synthetic organic chemistry mainly due to of its many advantages.  Accordingly, this book has attempted to bring out the advantages of using enzymes involving complex underivatized and unprotected substrates in non-polar media under homogenous and heterogeneous reaction conditions. Merits and demerits of using enzymes in terms of yields and selectivity/specificity are presented without any prejudice.

Almost all the reactions dealt with are from the author’s laboratory comprising diverse substrates, and the catalysis involves two important hydrolyzing enzymes, extensively examined for the reverse reactions. Thus, esterification involving lipses and glycosylation involving glycosidases were investigated with respect to various strategies like optimization of reaction conditions, response surface methodology and  kinetics,  carrying out reactions under solvent, non-solvent and super critical carbon dioxide  conditions.

In short, the work presented is to ensure the comprehension of the problems faced by the researchers in this area so as to work out further efficient strategies for carrying out enzymatic transformations  in the laboratory successfully with better yields and specificity.

Dr Divakar is working as a Chief Scientist in the Central Food Technological Research Institute, Mysore, where he joined as a Scientist. Before this, he served as CSIR Pool Officer at Molecular Biophysics Unit, Indian Institute of Science, Bangalore, After completing his post-graduation in 1976 from Pachaiyappa’s College, Chennai, he had a brief stint in a polymer industry, M/S Reichhold Chemicals, Ind. Ltd., Chennai. He completed his PhD degree in Chemistry from the Australian National University, Canberra, Australia in 1982. The author is actively involved in research for the past 36 years. He developed few alkyd, phenol-formaldehyde, urea-formaldehyde and epoxy polymers, while working in the industry. While working as a Research and Development chemist at Ms. Reichhold Chemicals (Ind.) Ltd, he was actively involved in research in the fields of Alkyd resins, Unsaturated polyesters, Phenol-formaldehyde resins (resoles and novolaks), Urea-formaldehyde resins, and Epoxy resins After completing his PhD, he was involved in research work on three important areas, namely, i) NMR investigations of some biological systems ii) Host-guest complexation Chemistry with special reference to Cyclodextrins iii) Enzyme Catalyzed Transformation reaction employing lipases and glycosidases He has so far guided various PhD and MSc students. He has so far published about 149 research articles including reviews. His work on Enzymatic Transformations has resulted in about 70 publications, which prompted him to write this book on Enzymatic Transformation.