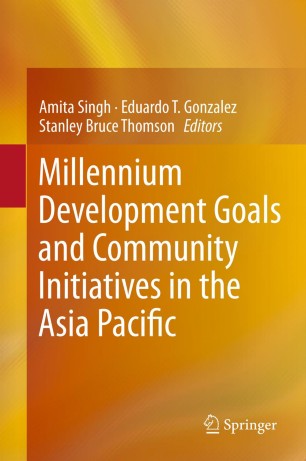 Millennium Development Goals and Community Initiatives in the Asia Pacific

The book brings together implementation studies from the Asia Pacific countries in the context of the deadline of 2015 for achieving the Millennium Development Goals. The contributors to this volume are scholars belonging to the Network of Asia Pacific Schools and Institutes of Public Administration and Governance (NAPSIPAG). NAPSIPAG is the only non-West governance research network presently located at Jawaharlal Nehru University, New Delhi after having shifted from its original location at INTAN (Government of Malaysia) at Kuala Lumpur in 2009. ‘Implementation’ is a less understood but a much debated area of governance research. It requires micro-level analysis of government agencies, service delivery departments and stakeholders on one hand and its national and global policy level connections on the other. The implementation studies relate to the new initiatives which governments across the region have undertaken to reach out to the MDG targets agreed upon in 2000. The focus of analysis is the policy framework, local capacities of both the government agencies and people in drawing partnerships with relevant expert groups. The book is especially important in the background of 15 voluminous Administrative Reforms Commission Reports accumulating dust in India and similar efforts lying unattended in many other countries of this region as well. Countries like Malaysia, which has focused upon ‘implementation strategies’ combined with timely evaluation and supervision of administrative agencies has almost achieved most of their committed MDGs. A special report of Malaysian efforts, initiates the debate of moving beyond the ‘best practice research’ in implementation arena. The central idea of this book is to demonstrate the role of communities in making governance effective and government responsive to the needs of people.