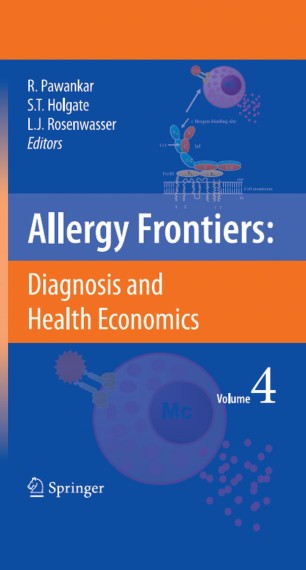 When I entered the field of allergy in the early 1970s, the standard textbook was a few hundred pages, and the specialty was so compact that texts were often authored entirely by a single individual and were never larger than one volume. Compare this with Allergy Frontiers: Epigenetics, Allergens, and Risk Factors, the present s- volume text with well over 150 contributors from throughout the world. This book captures the explosive growth of our specialty since the single-author textbooks referred to above. The unprecedented format of this work lies in its meticulous attention to detail yet comprehensive scope. For example, great detail is seen in manuscripts dealing with topics such as “Exosomes, naturally occurring minimal antigen presenting units” and “Neuropeptide S receptor 1 (NPSR1), an asthma susceptibility gene.” The scope is exemplified by the unique approach to disease entities normally dealt with in a single chapter in most texts. For example, anaphylaxis, a topic usually confined to one chapter in most textbooks, is given five chapters in Allergy Frontiers. This approach allows the text to employ multiple contributors for a single topic, giving the reader the advantage of being introduced to more than one vi- point regarding a single disease.

University of Southhampton School of Medicine

Applying basic science to the clinical interface in allergy and asthma has been the guiding principle of Prof. Stephen Holgate's career. This has involved him in environmental and genetic epidemiology, physiology, cell and molecular biology of disease processes as they occur in humans. An AAAAI member since 1986 and Fellow from 1993, Professor Holgate has been active in the field of allergy and immunology both in the United Kingdom and overseas and in 2001 received the Academy's Honorary Fellow Award. He was President of the British Society of Allergy and Clinical Immunology (BSACI) from 1990-1993 and the Robert Cook Memorial Lecturer in 1995 and 2000. He received the RCP London Graham Bull Prize for research and was elected an honorary member of the Association of Physicians in UK and Ireland following the delivery of the Sir William Osler Lecture in 2003. He has been an active contributor to the Collegium Internationale Allergologicum since 1990.

Professor Holgate is a member of the Infection, Inflammation and Repair Division in the School of Medicine, University of Southampton at Southampton General Hospital, UK and since 1987 has held a Medical Research Council (MRC) Clinical Professorship. He received his undergraduate medical training at Charing Cross Hospital, London and specialised in respiratory medicine and allergy. He holds Fellowships from the Royal Colleges of Physicians, Pathologists, Institute of Biology and Academy of Medical Sciences. He is a member of the Royal Commission on Environmental Pollution and has been a censor of the Royal College of Physicians. He has served on a number of Government Committees including the Sub-committee for Efficacy and Adverse Drug Reactions of the CSM (SEAR), MRC Project Grant Committee, Systems Board, Cross Board Group and most recently Councils Subcommittee on Corporate Policy and Evaluation (SCoPE), its Clinical Research Oversight Group (CROG) and is Chairman of Councils new Subcommittee on Evaluation (SOE). He has been Chairman of the UK Department of Health Committee on the Medical Effects of Air Pollution and has been appointed as Chairman of the UK Government (DEFA) Expert Panel on Air Quality Standards and Chairman of the Science Council's Science in Health Group. He has been a member of the Royal Commission of Environmental Pollution since 2002. He serves as a member of the Board of Directors for the World Allergy Organization (WAO).

Professor Holgate is co-editor of Clinical and Experimental Allergy and has served on the editorial board of the Journal of Allergy and Clinical Immunology. He has edited several textbooks on allergy including Asthma and Rhinitis and Allergy, with release of 2nd editions in 2000 and is one of the co-editors of Allergy: Principles and Practice. He has published over 800 papers in peer reviewed journals. His work has been recognised with a Scientific Achievement Award of the IAACI in 1994, the Rhone-Poulenc Rorer World Health Award in 1995, the King Faisal International Prize in Medicine in 1999 and Doctorates Hon Causa at University of Ferrara, Italy and Jagellonian University, Krakow, Poland in 1997 and 1999 respectively. He was elected to the Polish Academy of Arts and Science in 2001, received the Royal Society of Medicine Ellison Cliffe Medal in 2003 and the University of Ghent Gold Medal for Achievement in Clinical Science in 2004.

According to the ISI Prof. Holgate was 8th most frequently cited author between 1990-2000 in the field of Biomedical Sciences in the United Kingdom and in 2002 became a member of ISI's most highly cited researcher database.

Prof. Pawankar MD., Ph.D is the Treasurer of the World Allergy Organization (WAO) and has served on the Board of Directors since 2000, is an Executive and Scientific Committee Member of the WHO’s ARIA Initiative and Chair of its Asia-Pacific Affiliate. She has served on several boards/ committeees like Vice-Chair of the Rhinitis Committee of the American Academy of Allergy Asthma and Immunology, Vice-Chair Asia Pacific Committee, and International Commiittee American College of Allergy Asthma and Immunology. She has been the President of the Trans-Pacific Allergy and Immunology Society and Asian Rhinology Symposium,  is the Founder President of the International Symposium on Asthma and Allergic Rhinitis (ISBAAR) and Director, Asian Allergy and Asthma Foundation and has served as a Committee Member/ Faculty at several International Congresses as well as government initiatives in the field of Rhinology, Allergy and Asthma.

Prof. Pawankar’s research interest is in the pathomechanisms, epidemiology and risk factors of allergy, asthma, air pollution, immune and molecular mechanisms in allerigc airway disease. new strategies in managing respiratory allergy, rhinosinusitis and nasal polyps, focussing on translational research in allergy, asthma and clinical immunology. Most important amongst her original works is the role of masts cells and gamma delta T cells in allergic airway disease.

Prof. Pawankar has received several prestigious academic awards and orations, has published more than 300 original papers and invited reviews and books including the J Clinical Investigation and Am J Crit Care Medicine. She is a member of several academic organizations like the Collegium International Allergolicum and honorary Fellow/ Member of several academic societies. She has been Visiting Professor to many universities including the Dept. of Pediatrics, Showa Univ School of Medicine. She is also an educator conducting courses and symposia and vivid campaigner to increase public awareness on allergy within the Asian region.

Prof. Rosenwasser’ s research interests include the molecular, cellular and genetic regulation of cytokines, the genetics of atopy and asthma, the role of cytokines in asthma, and vasculitis. Research-Cellular and Molecular Immunology. Allergen structure and recognition by T cells. Clinical-Asthma, Vasculitis, Drug Allergy, Insulin Allergy, New Therapies for Asthma and Allergy.

He was a former President of the American Academy of Allergy, Asthma and Immunology. He has also served as Editor-in-Chief of the Yearbook of Allergy, Asthma and Clinical Immunology published by Elsevier since 1994. He has published over 110 original publications as well as invited reviews and book such as the New England Journal of Medicine and the Journal of Experimental Medicine. He has also served on a number of government and foundation committees for grant review, including the National Institute of Allergy and Infectious Diseases AIDS Research Center, the National Institute of Health Immunological Sciences Study, the Arthritis Foundation, the American Heart Association and the American Lung Association. In 1997, he received the Solomon A Berson Alumni Achievement Award for research in clinical science from New York University.  He serves as a member of the Board of Directors for the World Allergy Organization (WAO).