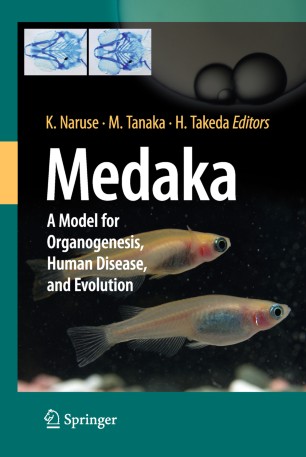 A Model for Organogenesis, Human Disease, and Evolution

Oryzias latipes, known as medaka, is a model organism from East Asia. Breeding of this small, egg-laying freshwater teleost fish has long been popular among hobbyists in Japan. Now, as biological science has entered the genome era, the medaka provides significant advantages that make it one of the most valuable vertebrate models: a large collection of spontaneous mutants collected over a century, the presence of highly polymorphic inbred lines established over decades, and a recently completed genome sequence. This book is the first comprehensive monograph to cover a variety of medaka research. It opens with a historical view of medaka, followed by a series of research topics in the four major areas where the medaka is increasingly important: genomics, genetics, and resources; organogenesis and disease models; germ cells, sex determination, and reproduction; and evolution. Readers will find state-of-the-art information on medaka genetics and genomics such as the first isolation of active transposons in vertebrates, the influence of chromatin structure on sequence variation, fine QTL analysis, and versatile mutants as human disease models.

“In view of the abundance of the topics treated in this volume, the state-of-the-art information on Medaka genetics and genomics, the meaningful figures and diagrams (many are suitable for teachings), and the wealth of references, this volume is surely a ‘must’ for those working with this model organism, but it is also recommended to all researches interested in fish biology.” (Hartmut Greven, Bulletin of Fish Biology, Vol. 15, 2015)