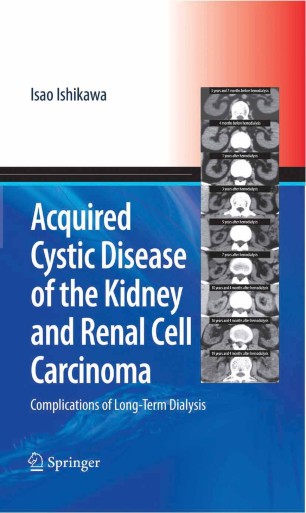 Acquired Cystic Disease of the Kidney and Renal Cell Carcinoma

I have been involved in the treatment of chronic renal insuf? ciency for 40 years, beginning with peritoneal dialysis immediately after graduation from medical school in 1965, then with hemodialysis in 1967 after I ? rst experienced it in Kanazawa, and with renal transplantation since 1972, when I was studying in the United States. During this period, the number of dialysis patients has continued to increase rapidly to the present ? gure of 257 765 (at the end of 2005), and with surprising increases in the survival rate. However, new and unexpected pathological conditions have also appeared as complications of long-term dialysis. One of these involves polycystic changes and their malignant transformation in diseased kidneys. Since I have studied these polycystic changes and their malignant transformation for many years, I decided to compile the results of my work in a book. Such conditions of diseased kidneys pose serious problems, particularly in Japan, where renal transplantation is performed very infrequently compared with other countries, and a large number of patients are managed by dialysis over a long period.