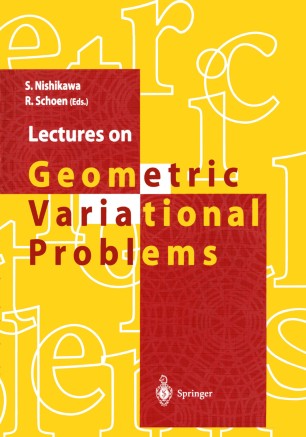 In this volume are collected notes of lectures delivered at the First In­ ternational Research Institute of the Mathematical Society of Japan. This conference, held at Tohoku University in July 1993, was devoted to geometry and global analysis. Subsequent to the conference, in answer to popular de­ mand from the participants, it was decided to publish the notes of the survey lectures. Written by the lecturers themselves, all experts in their respective fields, these notes are here presented in a single volume. It is hoped that they will provide a vivid account of the current research, from the introduc­ tory level up to and including the most recent results, and will indicate the direction to be taken by future researeh. This compilation begins with Jean-Pierre Bourguignon's notes entitled "An Introduction to Geometric Variational Problems," illustrating the gen­ eral framework of the field with many examples and providing the reader with a broad view of the current research. Following this, Kenji Fukaya's notes on "Geometry of Gauge Fields" are concerned with gauge theory and its applications to low-dimensional topology, without delving too deeply into technical detail. Special emphasis is placed on explaining the ideas of infi­ nite dimensional geometry that, in the literature, are often hidden behind rigorous formulations or technical arguments.