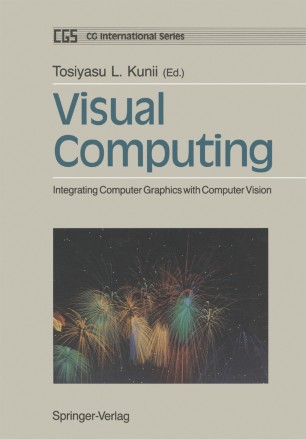 This volume presents the proceedings of the 10th International Conference of the Computer Graphics Society, CG International '92, Visual Computing - Integrating Computer Graphics with Computer Vision -, held at Kogakuin University, Tokyo in Japan from June 22-26,1992. Since its foundation in 1983, this conference has continued to attract high quality research articles in all aspects of computer graphics and its applications. Previous conferences in this series were held in Japan (1983-1987), in Switzerland (1988), in the United Kingdom (1989), in Singapore (1990), and in the United States of America (1991). Future CG International conferences are planned in Switzerland (1993), in Australia (1994), and in the United Kingdom (1995). It has been the editor's dream to research the integration of computer graphics with computer vision through data structures. The conference the editor put together in Los Angeles in 1975 involving the UCLA and IEEE Computer Societies had to spell out these three areas explicitly in the conference title, "computer graphics," "pattern recognition" and "data structures," as well as in the title of the proceedings published by IEEE Computer Society Press. In 1985, the editor gave the name "visual computer" to machines having all the three functionalities as seen in the journal under that name from Springer. Finally, the research in integrating visual information processing has now reached reality as seen in this proceedings of CG International '92. Chapters on virtual reality, and on tools and environments provide examples.