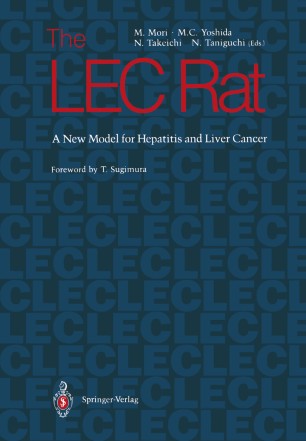 A New Model for Hepatitis and Liver Cancer

The LEC strain of rats, which spontaneously develop acute hepatitis as­ sociated with jaundice, chronic hepatitis, and ultimately hepatocellular carcinomas, was established by scientists in Sapporo, Japan. Careful ob­ servation and breeding led to the initial discovery of this characteristic, inherited liver disease in rats. Subsequent collaboration between scientists in Sapporo and other centers has revealed an autosomal recessive nature of inheritance, along with a variety of histopathological and biochemical findings. The causative mechanism(s) underlying this abnormality remained a mystery for some time, providing a challenge for many scientists who were attracted to the quest for clues to this enigma. In particular, the mech­ anism of spontaneous development of hepatocellular carcinomas in rats overcoming the acute phase of hepatitis and surviving with chronic hepatitis proved extremely interesting, because the involvement of a causative virus had been excluded in the early stages of investigation. Professor Michio Mori of Sapporo Medical College played a key role in the study of LEC rats, especially in the elucidation of the pathogenesis of hepatitis and hepatocellular carcinoma. He is one of the editors of this monograph which is composed of original contributions by the many scientists who have carried out their own studies on LEC rats. Of the various histopathological and biochemical alterations which have been reported, some are clearly secondary or tertiary events sequential to the primary change caused by gene mutation.