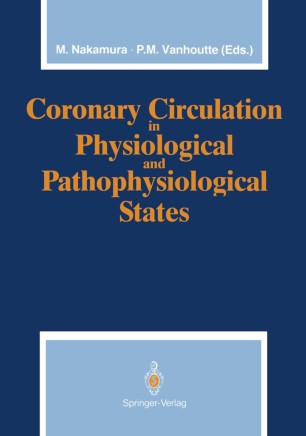 MOTOOMI NAKAMURA As we approach the 21st century, ischemic heart disease is the major cause of death in most of the developed nations of the world. Since the 1970s, much effort and expense have led to designs of coronary thrombolytic therapy, percutaneous coronary angioplasty (PTCA), coronary artery bypass grafting, heart transplantation, automatic defibrillators, as well as to the formation of beta blockers and com­ pounds which block the calcium channel. Socio-educational programs directed at exercise, diet, instruction in the risk factors of smoking, hyperlipidemia and hypertension have contributed to the decrease in the rate of morbidity and mortality of patients with ischemic heart disease. However, the first clinical event of ischemic heart disease, the so-called "heart attack" and sudden cardiac death continues to present problems, as the mechanisms involved in these events are poorly understood. It has long been thought that ischemic heart disease is the sequence of an organic fixed atherosclerotic obstruction of the epicardial coronary arteries and the role of coronary vasomotion has been given much less attention. Recent clinical and laboratory animal studies revealed that increased tonus and spasm of the large epicardial coronary arteries are the cause of various stages of ischemic heart disease. The role of coronary vasospasm in the development of un­ stable angina, sudden cardiac death and acute myocardial infarction remains open to debate. Pharmacophysiological studies showed that the epicardial large coronary artery contributes only 5% to regulation of normal coronary flow.