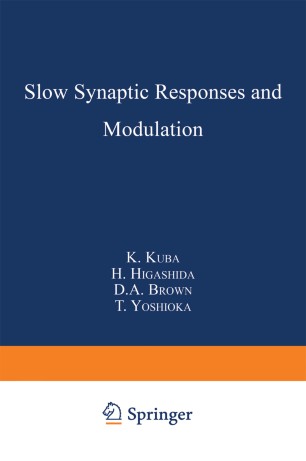 Information flow as nerve impulses in neuronal circuits is regulated at synapses. The synapse is therefore a key element for information processing in the brain. Much attention has been given to fast synaptic transmission, which predominantly regulates impulse-to-impulse transmission. Slow synaptic transmission and modu­ lation, however, sometimes have been neglected in considering and attempting to understand brain function. Slow synaptic potentials and modulation occur with a considerable delay in response to the accumulation of synaptic and modulatory inputs. In these contexts, they are plastic in nature and play important roles in information processing in the brain. A symposium titled "Slow Synaptic Responses and Modulation" was held as the satellite symposium to the 75th Annual Meeting of the Physiological Society of Japan on March 30-31, 1998, in Kanazawa. The theme was selected not only for the reason mentioned above, but also because of the considerable involvement of many Japanese scholars in establishing the basic issues. Following the dawn of synaptic physiological research, as Sir John Eccles, Sir Bernard Katz, and Professor Stephen Kuffler carried out pioneer work, Professor Kyozou Koketsu and Professor Benjamin Libet, the students of Sir John Eccles, and their colleagues established the concept of slow synaptic responses and modulation by studying vertebrate sympathetic ganglia. Since then, the concept has been ex­ panded with detailed investigations of both peripheral and central synapses at the levels of single ion channels, intracellular Ca"+ dynamics, intracellular transduc­ tion mechanisms, and genes.