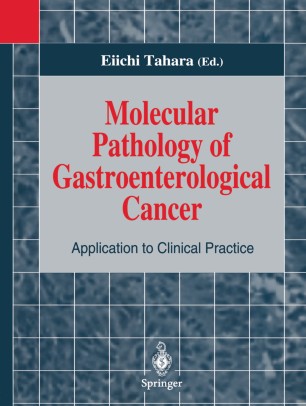 Twenty years have passed since I became a professor in the First Department of Pathology, Hiroshima University School of Medicine. It is my great pleas­ ure that Molecular Pathology o[ Gastroenterological Cancer-Application to Clinical Practice has been published by Springer-Verlag Tokyo to commemo­ rate the 20th anniversary of my professorship. Seeing the academic achievements of our department during these 20 years, I am confident that we could establish a department of oncology to research the pathogenesis of human cancer through systemic application of a variety of molecular techniques. We have demonstrated that the develop­ me nt and progression of esophageal, gastric, and colon cancer require mul­ tiple alterations affecting DNA mismatch repair genes, oncogenes, and tumorsuppressor genes, and that common and uncommon genetic changes exist for esophageal, gastric, and colorectal carcinomas. In addition to these genetic changes, the majority of gastrointestinal cancers express telomerase activity, with overexpression of telomerase RNA, indicating a powerful addi­ tional tool for early detection of gastrointestinal cancer. By transferring these basic observations to the clinic, we now are able to make accurate cancer diagnoses, thus determing the grade of malignancy and patient prognosis. We also can identify patients at high risk for developing cancer and create new therapeutic approaches. In fact, we have routinely implemented a new molecular diagnosis strategy at the Hiroshima City Medi­ cal Association Clinical Laboratory since August 1993.