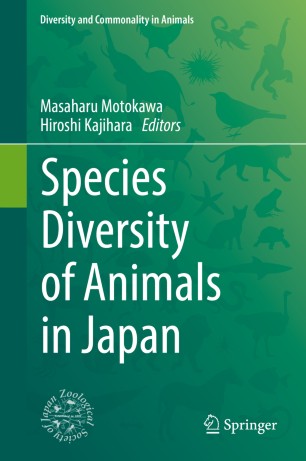 Species Diversity of Animals in Japan

Part of the Diversity and Commonality in Animals book series (DCA)

This book summarizes the status quo of the knowledge about the biodiversity in terrestrial, freshwater, and marine animals that live in Japan. Consisting of some 6,800 islands that are arrayed for approximately 3,500 km from north to south, the Japanese archipelago has a complex history in a paleogeographic formation process over time and harbors rich flora and fauna. This work will contribute to establishing a general biogeographic theory in archipelagoes around continental shelves.
Facing the ongoing extinction crisis, one of the most important tasks for our generation is to bequeath this precious natural heritage to future generations. As the first step toward this goal, a species list has been compiled through solid, steady alpha-taxonomic work in each taxon. Furthermore, the phylogeography and population genetic structure for each species is elucidated for deeper understanding of the local fauna, the scientific results of which should be the basis for establishing conservation policies and strategies. Also the problem of alien or introduced species is investigated as another threat to the native fauna.
Each of the 27 chapters is written by the most active specialist leading the field, thus readers can acquire up-to-date knowledge of the animal species diversity and their formation process of Japanese animals in the most comprehensive form available. This book is recommended for researchers and students who are interested in species diversity, biogeography, and phylogeography.