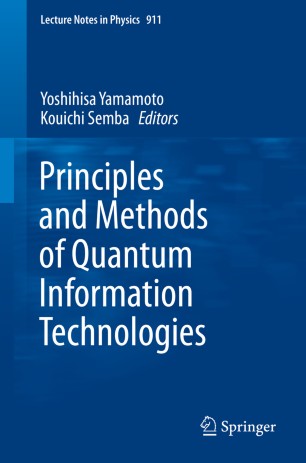 This book presents the research and development-related results of the “FIRST” Quantum Information Processing Project, which was conducted from 2010 to 2014 with the support of the Council for Science, Technology and Innovation of the Cabinet Office of the Government of Japan. The project supported 33 research groups and explored five areas: quantum communication, quantum metrology and sensing, coherent computing, quantum simulation, and quantum computing. The book is divided into seven main sections. Parts I through V, which consist of twenty chapters, focus on the system and architectural aspects of quantum information technologies, while Parts VI and VII, which consist of eight chapters, discuss the superconducting quantum circuit, semiconductor spin and molecular spin technologies.

Readers will be introduced to new quantum computing schemes such as quantum annealing machines and coherent Ising machines, which have now arisen as alternatives to standard quantum computers and are designed to successfully address NP-hard/NP-complete combinatorial optimization problems, which are ubiquitous and relevant in our modern life. The book offers a balanced mix of theory-based and experimentation-based chapters written by leading researchers. Extensive information is provided on Quantum simulation, which focuses on the implementation of various many-body Hamiltonians in a well-controlled physical system, Quantum key distribution, Quantum repeaters and quantum teleportation, which are indispensable technologies for building quantum networks with various advanced applications and require far more sophisticated experimental techniques to implement.