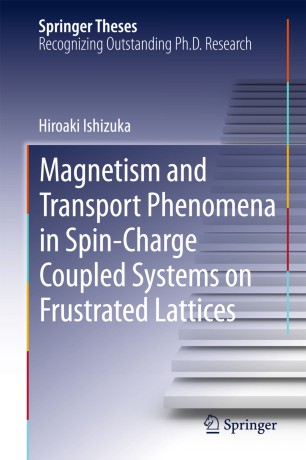 In this thesis, magnetism and transport phenomena in spin-charge coupled systems on frustrated lattices are theoretically investigated, focusing on Ising-spin Kondo lattice models and using a combination of Monte Carlo simulation and other techniques such as variational calculations and perturbation theory. The emphasis of the study is on how the cooperation of spin-charge coupling and geometrical frustration affects the thermodynamic properties of the Kondo lattice models; it presents the emergence of various novel magnetic states, such as the partial disorder, loop-liquid, and spin-cluster states. The thesis also reveals that the magnetic and electronic states and transport properties of these models demonstrate peculiar features, such as Dirac half-metals, anomalous Hall insulators, and spin Hall effects. Study of novel magnetic states and exotic transport phenomena in Kondo lattice systems is a field experiencing rapid progress. The interplay of charge and spin degrees of freedom potentially gives rise to various novel phases and transport phenomena which are related to strongly correlated electrons, frustrated magnetism, and topological states of matter.

The results presented in this thesis include numerical calculations that are free from approximations. Accordingly, they provide reliable reference values, both for studying magnetism and transports of related models and for experimentally exploring novel states of matter in metallic magnets.