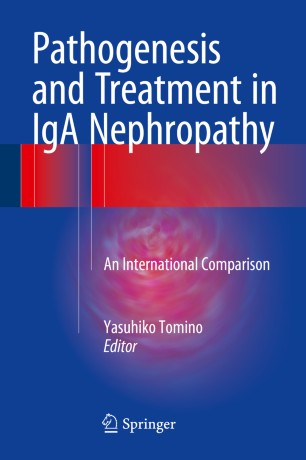 Pathogenesis and Treatment in IgA Nephropathy

This book discusses the latest findings on the pathogenesis and treatment of IgA nephropathy. It particularly focuses on recently recognized initiation and progression factors and the varying treatment strategies in different regions, such as Asia, Europe, and the United States. More than 40 years have passed since Dr. Jean Berger first described primary IgA nephropathy (“Nephropathy with mesangial IgA-IgG deposits”) as a new disease entity.

Immunohistopathologically, IgA nephropathy is characterized by the granular deposition of IgA (IgA1) and C3 in the glomerular mesangial areas with mesangial cell proliferation and the expansion of mesangial matrices. It is clear that IgA nephropathy is one of the most common types of chronic glomerulonephritis in the world. This disease may lead to end-stage kidney disease, with its enormous economic impact on healthcare everywhere. Efforts by many investigators around the world have gradually clarified various aspects of the pathogenesis and treatment of IgA nephropathy. However, there are many controversial strategies for the treatment of patients with IgA nephropathy throughout the world, as there are several limitations for treatment in each country. This volume provides nephrologists everywhere with an overview and comparison of both global and regional findings in basic and clinical fields in IgA nephropathy. It covers genetic variation, aberrant IgA1 production, and classification etiology, guidelines, and treatment goals, with all chapters written by top international researchers.