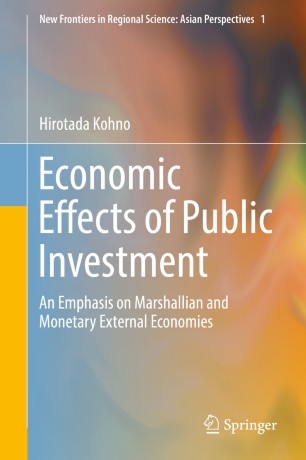 An Emphasis on Marshallian and Monetary External Economies

This book shows the necessity of measuring the incidence-basis indirect economic effects of public investments. The essential argument can be traced back to H. Mohring versus J. Tinbergen, the conclusions of one contradicting those of the other. Their arguments are called, respectively, “transfer” and “existing theory” of the indirect economic effect of public investments such as highways.

The author has first defined the categories of “generation-basis” and “incidence-basis” economic effects in addition to the categories of direct and indirect economic effects, and has shown that it is essential to measure the incidence-basis indirect economic effects for decision making about public investments. The second major point is that, in this sense, the measurement must rely on the general and dynamic spatial modeling simulation approach. The third essential point is that Tinbergen is correct as far as we have to cope with a real setting in which the Marshallian type of external economies exists.

Another characteristic is that the monetary (pecuniary) external economies are dealt with systematically, for the superiority of public investment criteria depends greatly on whether they are taken hold of or not. This book lays emphasis on the process toward the equilibrium, not the equilibrium itself.