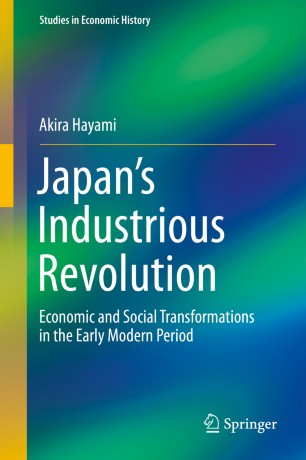 Economic and Social Transformations in the Early Modern Period

This book explains in fascinating detail how economic and social transformations in pre-1600 Japan led to an industrious revolution in the early modern period, and how the fruits of the Industrious Revolution are what have supported Japan since the eighteenth century, improving living standards and leading to the formation of the work ethic of modern Japan.

The arrival of the Sengoku Period in the sixteenth century saw the emergence and domination of government by the warrior class. It was Tokugawa Ieyasu who unified the realm. Yet this unity did not give rise to an autocratic state, as the shogun was recognized merely as a main pillar of the warrior class.

Economically, however, from the fourteenth century, currency payments for shōen nengu (taxes paid to the proprietor) became standard, and currency circulation began, primarily in the central region. Under Tokugawa rule, organized domestic coinage of currency began, opening the way to establishing a national economic society. Also, agricultural land was surveyed through cadastral surveys known as kenchi. Land values were converted in terms of rice, so the expected rice yields for each village were assessed, and the lords used this as a benchmark for imposing taxes.

In the sixteenth and seventeenth centuries, Japan experienced a “great transition,” and conditions for peasants, agriculture, and farming villages underwent great changes. Inefficient traditional agriculture using peasants in a state of servitude was transformed into highly efficient small-sized farming operations which relied on family labor. As production yields increased due to labor-intensive agriculture, the profits obtained by the peasants improved their living standards. The stem-family system became the norm through which work ethics and even literacy were transmitted. This very change was the result of the “industrious revolution” in Japan.

The book thus presents the framework of the facts of pre-industrial Japanese history and depicts pre-modern Japan from a macroscopic point of view, showing how the industrious revolution came about. It is certain to be of great interest to economists and historians alike.