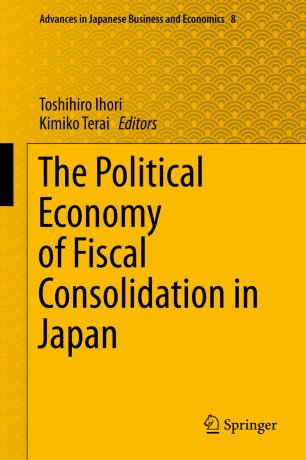 The Political Economy of Fiscal Consolidation in Japan

Part of the Advances in Japanese Business and Economics book series (AJBE, volume 8)

This book investigates the reasons for persistent public deficits and delayed fiscal reform in Japan, placing a special emphasis on political economy aspects. Japan is confronted with the need to pursue fiscal discipline for fiscal consolidation and implement structural reforms for reorganizing fiscal expenditures. Focusing on particular policy fields including social security, female labor supply, public works, and intergovernmental transfer schemes, the book clarifies economic and political elements that have hindered effective steps toward these two goals. Facing population aging and a business downturn, the Japanese government was urged to increase social security expenditures and the budget for Keynesian stimulus policies. As elucidated in the book, the institutional design has worked to over-represent the demands of elderly generations and local interest groups and to expand these expenditures. Rigorous theoretical and numerical analyses reported throughout the book consequently provide readers with insights into incentive designs and institutional reforms necessary for fiscal consolidation, also presenting points of view for public policy and public debate.

Kimiko Terai is a professor of economics at Keio University. She has a B.A. in education from Tokushima University and an M.A. and a Ph.D. in economics from The University of Tokyo. Her major field of research is public economics. Details are at her website.