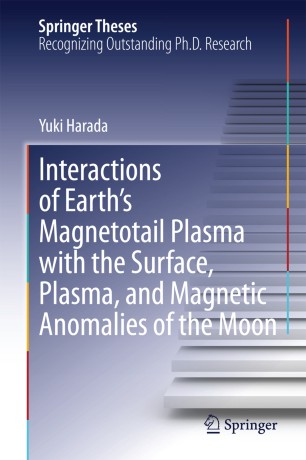 Interactions of Earth’s Magnetotail Plasma with the Surface, Plasma, and Magnetic Anomalies of the Moon

This thesis describes the essential features of Moon-plasma interactions with a particular emphasis on the Earth's magnetotail plasma regime from both observational and theoretical standpoints. The Moon lacks a dense atmosphere as well as a strong intrinsic magnetic field. As a result, its interactions with the ambient plasma are drastically different from solar-wind interactions with magnetized planets such as Earth. The Moon encounters a wide range of plasma regime from the relatively dense, cold, supersonic solar-wind plasma to the low-density, hot, subsonic plasma in the geomagnetic tail. In this book, the author presents a series of new observations from recent lunar missions (i.e., Kaguya, ARTEMIS, and Chandrayaan-1), demonstrating the importance of the electron gyro-scale dynamics, plasma of lunar origin, and hot plasma interactions with lunar magnetic anomalies. The similarity and difference between the Moon-plasma interactions in the geomagnetic tail and those in the solar wind are discussed throughout the thesis. The basic knowledge presented in this book can be applied to plasma interactions with airless bodies throughout the solar system and beyond.