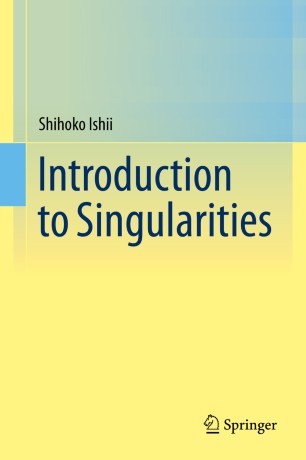 This book is an introduction to singularities for graduate students and researchers.

It is said that algebraic geometry originated in the seventeenth century with the famous work Discours de la méthode pour bien conduire sa raison, et chercher la vérité dans les sciences by Descartes. In that book he introduced coordinates to the study of geometry. After its publication, research on algebraic varieties developed steadily. Many beautiful results emerged in mathematicians’ works. Most of them were about non-singular varieties. Singularities were considered “bad” objects that interfered with knowledge of the structure of an algebraic variety. In the past three decades, however, it has become clear that singularities are necessary for us to have a good description of the framework of varieties. For example, it is impossible to formulate minimal model theory for higher-dimensional cases without singularities. Another example is that the moduli spaces of varieties have natural compactification, the boundaries of which correspond to singular varieties. A remarkable fact is that the study of singularities is developing and people are beginning to see that singularities are interesting and can be handled by human beings. This book is a handy introduction to singularities for anyone interested in singularities. The focus is on an isolated singularity in an algebraic variety. After preparation of varieties, sheaves, and homological algebra, some known results about 2-dim