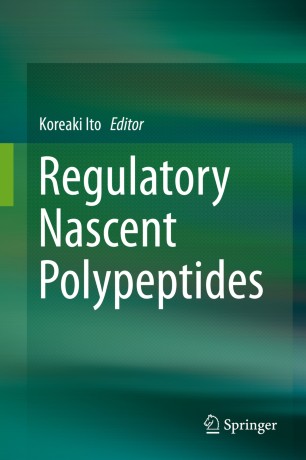 This book highlights a new paradigm of translation control by regulatory nascent polypeptides, which is integrated into cellular regulatory systems. Translation lies in the hub of the central dogma of biology, in which the genetic information in the forms of 4-letter sentences is translated into 20-letter sentences: sequences of amino acids that constitute proteins, the functional molecules of life. The process involves a huge number of chemical reactions as well as physical movements of the ribosome along a messenger RNA and takes, on average, tens of seconds in prokaryotes and a few minutes in eukaryotes. Detailed knowledge about the progression of translation, called "elongation", only recently started to accumulate. Newly synthesized and growing polypeptides, called nascent polypeptides, can interact with the intra-ribosomal conduit, called the ribosomal exit tunnel, when they have some specific amino acid sequences, called "an arrest sequence". Such interaction leads to a halt in the elongation reaction. Resulting stalling of the ribosome on messenger RNA can affect the secondary structure and/or localization of the message in the cell, consequently leading to biological outputs such as elevation or reduction of a gene product. This book provides a first collection of knowledge focused on regulatory nascent polypeptides, which have been studied recently using diverse organisms including bacteria, plants, and animals. Readers will be impressed by a new paradigm showing that proteins can function even during the course of their biosynthesis and that the ribosome, the "factory" of protein production, interacts with and inspects its products to adjust the speed of completion of each product. Moreover, regulatory nascent polypeptides can sense or monitor physiological states of the cell and modulate its ability to arrest translation. Living organisms use such intricate control mechanisms of translational speed to regulate gene expression. This book will be a useful addition for established scientists while inspiring students and young scientists to gain deeper insights into the processes of expression of genetic information.