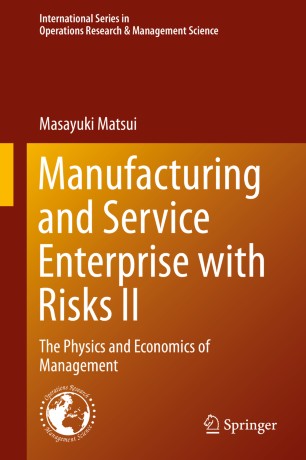 The Physics and Economics of Management

This book presents recent work in the physics and economics of management through the developmental theory and practice of management science/operations research (MS/OR) that goes beyond the author’s earlier book on the same subject. (Volume 125 in Springer’s MS/OR series) This current work makes a useful contribution to the next-generation discrete system of science and management for a better society.

The scope of the book is focused on the science and management of the 3M&I–Time system in the discrete world, where that system is a complex class consisting of humans, material/machine, money and time. The system is treated by a stochastic/intelligence (medium) approach. The science of this system is the interdisciplinary science of physics, management, economics and related fields, and is based on synthesis and intelligence in the new discrete world. Here, this domain is referred to as a discrete and complex science (of physics and economics) in industry and society.

Another domain, which is referred to as higher management science and operations in this book, stems from the change in traditional management to higher management driven by the power of information and communications technology (ICT) in the cloud computing/global age. This domain exists to meet the needs of logic for real-time/systematic decisions and management in a changeable, speeded-up and risk environment.

Chameleon’s criteria at the efficiency vs. loss Complex system of 3M&I-Time type Decision-aided tools for the post ERP/SCM Matsui’s form: W=ZL in the discrete world Real-Time management at the cloud-ICT age

Dr. Masayuki Matsui is a professor of Kanagawa University, Japan, and Emeritus professor of UEC Tokyo (The University of Electro-Communications, Japan). He received a BS and MS in Industrial Engineering from Hiroshima University, and a DEng in research on conveyor-serviced production systems from the Tokyo Institute of Technology, Japan. He was a visiting scholar at UC Berkeley and Purdue University in 1996–97. His recent scope of research interests ranges from Industrial Engineering to Physics, Management and Economics in discrete science, and he has appeared as the author of over 400 technical papers and 15 books. His achievements include the invention of queueing formulas, the pair matrix table, Matsui’s logic, and Chameleon’s criteria. He is the former President of the Japan Industrial Management Association (JIMA), and is now a board member of the International Foundation for Production Research. He served as the editor/director of the JIMA journal (2000–05), was honored with the JIMA Prize and Award in 2005, The Sir Isaac Newton Scientific Award of Excellence 2012, and is currently a Senior Member of IIE. He is listed in Nihon-Shinshiroku (Who’s Who in Japan), Marquis Who’s Who in Science and Engineering, Marquis Who’s Who in the World (USA), and 2000 Outstanding Intellectuals of the 21st Century.