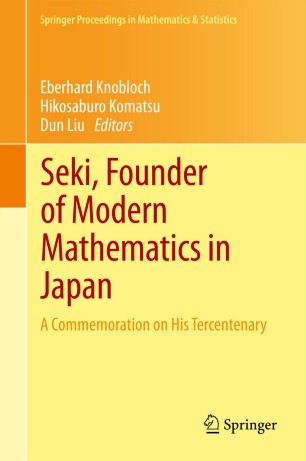 A Commemoration on His Tercentenary

Seki was a Japanese mathematician in the seventeenth century known for his outstanding achievements, including the elimination theory of systems of algebraic equations, which preceded the works of Étienne Bézout and Leonhard Euler by 80 years. Seki was a contemporary of Isaac Newton and Gottfried Wilhelm Leibniz, although there was apparently no direct interaction between them.

Hikosaburo Komatsu (Professor emeritus, The University of Tokyo), one of the editors, is known for partial differential equations and hyperfunction theory, and for his study on the history of Japanese mathematics. He served as the President of the International Congress of Mathematicians Kyoto 1990.