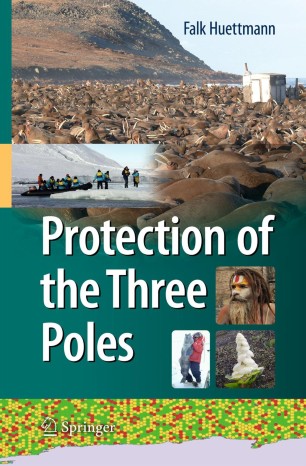 Protection of the Three Poles

The Arctic, the Antarctic, and the Hindu Kush-Himalayas form a unique trio called the three poles. Mainly composed of snow, rock, and ice, these precious regions contain vast areas of wilderness for humanity. Together they make up the primary water resource of this planet and directly shape our climate. This book presents a first-ever global assessment and progressive review of the three poles and the urgent need for their protection. Sins of the past have irrevocably harmed these regions, and the future looks bleak with the global population reaching 9 billion by 2060 and climate change on the rise. Presented here is a wide-reaching and coherent overview of the poles’ biodiversity, habitats, and ongoing destruction. Failed protection and social targets set by the United Nations and other bodies are exposed while economic growth and urban sprawl continue unabated. Polar regions play a major role on the global agenda as they are rich in oil and other resources, marking them for contamination, overfishing, and further degradation. The chapters are written by experts in their fields, and their evidence leaves no doubt that we already live beyond our carrying capacity on a finite space. A global protection role model and several outlook scenarios are proposed to help set in motion polar protection priorities that are actually valid. That way, it may not be too late to salvage this huge, last wilderness so relevant for the well-being of humanity and at least protect what is still left.