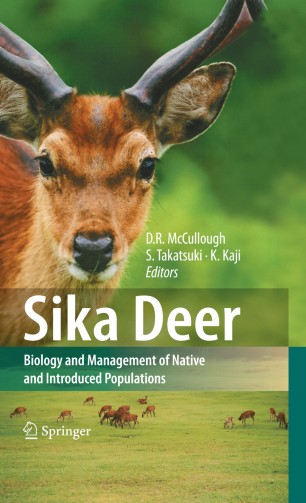 Biology and Management of Native and Introduced Populations

Sika deer, the graceful spotted deer of Japanese and Chinese art, originally were native to Asia from far-east Russia to Vietnam to the islands of Japan and Taiwan. They are widely raised in captivity to supply velvet antler for traditional medicine. They also were introduced to Europe, North America, and New Zealand, where they compete or interbreed with native deer. Sika deer typically occupy lowland hardwood forests with low winter snow depths, where they thrive in sites disturbed by fire, storm, or logging. In high numbers they can severely impact vegetation though overgrazing, stripping bark from trees and damaging crop fields and forest plantations. Their numbers are high in many parts of Japan, moderate in Russia, and reduced or extinct in the wild in China, Korea, Vietnam, and Taiwan. This book explores their basic biology, behavior, and ecology, including management for sport hunting, conservation or recovery of threatened populations, and resolution of conflict with humans in native and introduced lands.