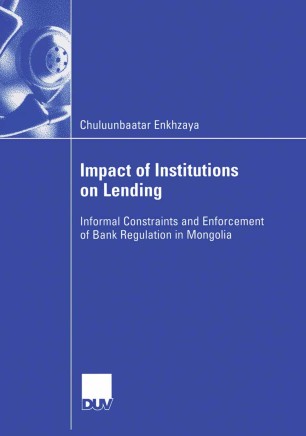 Impact of Institutions on Lending

Informal Constraints and Enforcement of Bank Regulation in Mongolia

In the 1990s an unprecedented transformation of the economic co-ordination of economies in transition was set in motion. As the reforms neither considered the time needed to establish the market nor dealt with the process itself, microeconomic reforms aimed at establishing the market and at inducing market-oriented behaviour need to be adjusted.

Chuluunbaatar Enkhzaya examines the "inadequate" behaviour of banks in Mongolia by analysing the institutional framework of the banking system, especially in lending. She focuses on the genesis of informal institutions of lending and their interaction with formal institutions of lending. Herewith, informal institutions such as the attitude to risk were indirectly observed by diagnosing the "action-regulating" knowledge of bankers. In order to ensure an effective allocation of the scarce financial resources of Mongolia the author therefore suggests a change - as simultaneous as possible - of formal and informal rules.