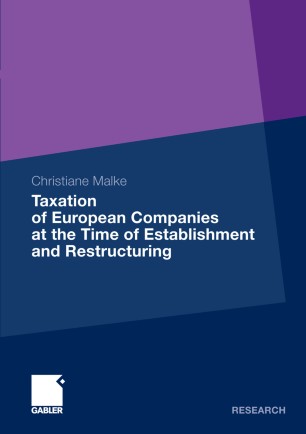 Taxation of European Companies at the Time of Establishment and Restructuring

In 2004, the first legal entity applicable in all EU member states, the so-called European Company or Societas Europaea (SE), was introduced. Especially, the taxation of hidden reserves is still a major concern for companies wanting to reorganize themselves across borders. Christiane Malke analyzes the current issues resulting from the entry into an SE, the transfer of seat of an SE from one EU member state to another one and the exit out of an SE in the 27 member states of the EU taking into consideration the Merger Directive. Based on existing deficiencies the author provides reform approaches that consider changes to the national law of the member states, to EU law as well as to the proposals provided by the European Commission regarding the introduction of a Common (Consolidated) Corporate Tax Base.