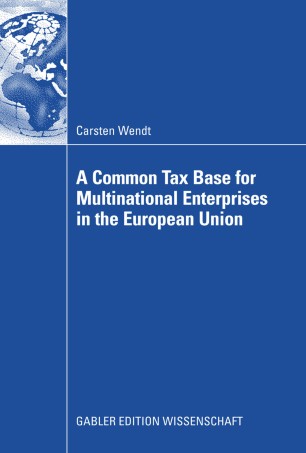 A Common Tax Base for Multinational Enterprises in the European Union

Company taxation is an important element for the establishment and the completion of the Internal Market. Against this background, the European Commission recommends the harmonisation of the tax base in the European Union.

Carsten Wendt analyses the necessity, the concept as well as potential advantages and effects of a common tax base for multinational enterprises in the European Union. He addresses important issues concerning a common tax base, such as the definition of the consolidated group, the technique and scope of consolidation and the formula used to allocate the consolidated tax base among the involved member states. The author provides alternative options to solve these issues and concludes that a common tax base as intended by the European Commission would remedy many of the existing tax obstacles for multinational enterprises in the EU. However, distortions will remain, mainly because member states retain their sovereignty to set their tax rates independently and the territorial scope of a common tax base has to be restricted to group entities located within the EU.