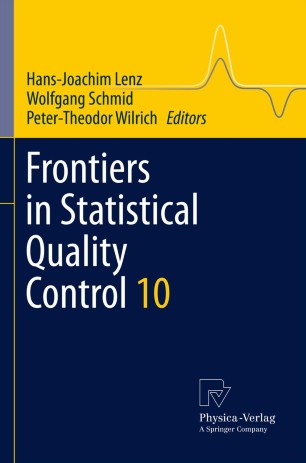 The 10th International Workshop on Intelligent Statistical Quality Control took place in Seattle, USA, Aug 18-20, 2010. It was hosted by Professor C. M. Mastrangelo, Department of Industrial and Systems Engineering, University of Washington, Seattle. The workshop was jointly organized by Professors H.- J. Lenz, C. M. Mastrangelo, W. Schmid and P.-T. Wilrich. The twenty-seven papers in this volume were carefully selected by the scientific program committee, reviewed by its members, revised by the authors and, finally, adapted for this volume by the editors.

Hans-J. Lenz received his doctorate (Dr. rer. pol. in Statistics and Operations Research) at the Freie Universität Berlin in 1973. He completed his venia legendi (post-doctoral degree) in Statistics and Operations Research at the same university in 1976. From 1978-2008 he was Professor of Applied Computer Science and Statistics at the Freie Universität Berlin. In 1978 he refused a professorship of Statistics at the University of Bonn. During his sabbaticals in 1993 and 1996-97 he was a visiting professor at Lawrence Berkeley Natl. Lab, Dept. of Computer Science Research and Development, Berkeley, USA. He has published or co-edited more than twenty books and some 350 technical papers. In 2005 the Romanian Statistical Society appointed him an honorary member, and in 2008 he received the golden medal of the Freie Universität Berlin for his long years of service.

Wolfgang Schmid studied Mathematics at the University of Ulm, Germany. He received his diploma in 1982 and doctorate in 1984 with a thesis on “Localization of outliers in autoregressive processes.” In 1991 he completed his post-doctoral studies with a paper on “Outlier Tests and Outlier Identification in Time Series” and the venia legendi for Mathematics.  After stays in Ulm, Trier and Stuttgart he became a full professor of Statistics at the European University Viadrina in Frankfurt (Oder) in 1995. Wolfgang Schmid is the author of over 100 research papers in statistics. His main research areas are statistical process control, statistics in finance and environmetrics. He is currently associate editor of Sequential Analysis and of AStA-Advances in Statistical Analysis. Since 2008 he has been a board member of the German Statistical Society.

Born in 1937, Peter-Theodor Wilrich studied Electrical Engineering in Hamburg and Aachen and received his Engineering diploma in 1961. He earned a further diploma in Industrial Engineering in 1984 and his doctorate with a dissertation in the field of queuing theory in 1987. From 1972 until 1976 he was associate professor at the Technical University of Aachen’s Institute of Statistics. He later became full professor of statistics at the Freie Universität Berlin’s Institute of Statistics and Econometrics, where he worked until his retirement in 2002. His fields of interest include statistical quality control, industrial applications of statistical methods, and experimental design, especially problems of accuracy of measurement and inter-laboratory tests.

“This edited volume contains affluence information, a one-stop shop. … All the chapters are self-contained, in a sense. The volume showcases many useful topics and procedures for practitioners and researchers alike in the arena of statistical quality control. The book can also be served as a reference book. The papers in the volume are presented in an intuitive and appealing manner, giving the volume an accessible and wider readership.” (S. E. Ahmed, Technometrics, Vol. 55 (3), August, 2013)