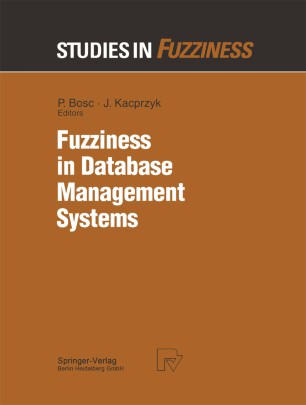 Part of the Studies in Fuzziness book series (STUDFUZZ, volume 5)

The volume "Fuzziness in Database Management Systems" is a highly informative, well-organized and up-to-date collection of contributions authored by many of the leading experts in its field. Among the contributors are the editors, Professors Patrick Bose and Janusz Kacprzyk, both of whom are known internationally. The book is like a movie with an all-star cast. The issue of fuzziness in database management systems has a long history. It begins in 1968 and 1971, when I spent my sabbatical leaves at the IBM Research Laboratory in San Jose, California, as a visiting scholar. During these periods I was associated with Dr. E.F. Codd, the father of relational models of database systems, and came in contact with the developers ofiBMs System Rand SQL. These associations and contacts at a time when the methodology of relational models of data was in its formative stages, made me aware of the basic importance of such models and the desirability of extending them to fuzzy database systems and fuzzy query languages. This perception was reflected in my 1973 ffiM report which led to the paper on the concept of a linguistic variable and later to the paper on the meaning representation language PRUF (Possibilistic Relational Universal Fuzzy). More directly related to database issues during that period were the theses of my students V. Tahani, J. Yang, A. Bolour, M. Shen and R. Sheng, and many subsequent reports by both graduate and undergraduate students at Berkeley.