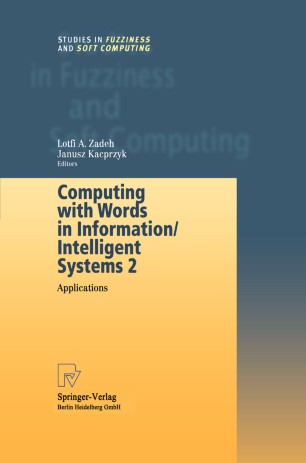 Computing with Words in Information/Intelligent Systems 2

Part of the Studies in Fuzziness and Soft Computing book series (STUDFUZZ, volume 34)

The volume is the first one in the world literature which is a comprehensive, up to date account on computing with words, a new direction in broadly perceived intelligent systems, proposed and advocated by Professor Zadeh, the founder of fuzzy sets theory and fuzzy logic. Historically, computing was focused on manipulation of numbers. However, in recent years it became more and more obvious that computing had been encompassing not only this, but also manipulation on signal, sounds, images and text; the latter aspects of computing are becoming more and more relevant. However, the traditional manipulation of text (e.g., machine translation, spell checking, etc.) does not cover the mainstream of computing with words, mainly the representation and manipulation of propositions from natural language describing operations and relations. Such problems cannot be solved by conventional methods of logic, probability theory and numerical analysis. Fuzzy logic is shown to be an effective tool to handle such problems.
Computing with words may form a basis of a computational theory of perceptions inspired by a remarkable human ability to perform a wide variety of tasks just on the basis of vague and imprecise information expressed in natural language.
In Part 2 applications in a wide array of fields are presented which use the paradigm of computing with words, exemplified by reasoning, data anaylsis, data mining, machine learning, risk anaylses, reliability and quality control, decision making, optimization and control, databases, medical diagnosis, business analyses, traffic management, power system planning, military applications, etc.