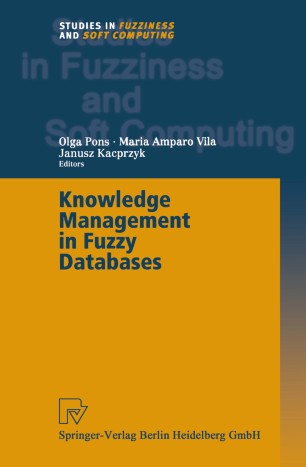 Part of the Studies in Fuzziness and Soft Computing book series (STUDFUZZ, volume 39)

1. When I was asked by the editors of this book to write a foreword, I was seized by panic. Obviously, neither I am an expert in Knowledge Representation in Fuzzy Databases nor I could have been beforehand unaware that the book's contributors would be some of the most outstanding researchers in the field. However, Amparo Vila's gentle insistence gradually broke down my initial resistance, and panic then gave way to worry. Which paving stones did I have at my disposal for making an entrance to the book? After thinking about it for some time, I concluded that it would be pretentious on my part to focus on the subjects which are dealt with directly in the contributions presented, and that it would instead be better to confine myself to making some general reflections on knowledge representation given by imprecise information using fuzzy sets; reflections which have been suggested to me by some words in the following articles such as: graded notions, fuzzy objects, uncertainty, fuzzy implications, fuzzy inference, empty intersection, etc.