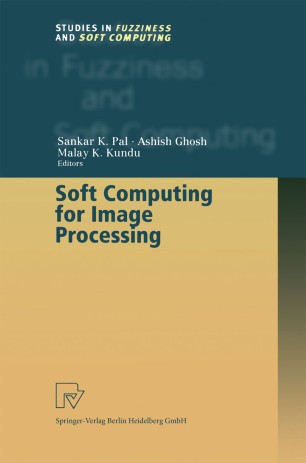 Part of the Studies in Fuzziness and Soft Computing book series (STUDFUZZ, volume 42)

Any task that involves decision-making can benefit from soft computing techniques which allow premature decisions to be deferred. The processing and analysis of images is no exception to this rule. In the classical image analysis paradigm, the first step is nearly always some sort of segmentation process in which the image is divided into (hopefully, meaningful) parts. It was pointed out nearly 30 years ago by Prewitt (1] that the decisions involved in image segmentation could be postponed by regarding the image parts as fuzzy, rather than crisp, subsets of the image. It was also realized very early that many basic properties of and operations on image subsets could be extended to fuzzy subsets; for example, the classic paper on fuzzy sets by Zadeh [2] discussed the "set algebra" of fuzzy sets (using sup for union and inf for intersection), and extended the defmition of convexity to fuzzy sets. These and similar ideas allowed many of the methods of image analysis to be generalized to fuzzy image parts. For are cent review on geometric description of fuzzy sets see, e. g. , [3]. Fuzzy methods are also valuable in image processing and coding, where learning processes can be important in choosing the parameters of filters, quantizers, etc.