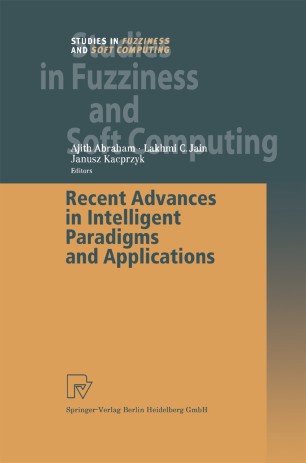 Part of the Studies in Fuzziness and Soft Computing book series (STUDFUZZ, volume 113)

Digital systems that bring together the computing capacity for processing large bodies of information with the human cognitive capability are called intelligent systems. Building these systems has become one of the great goals of modem technology. This goal has both intellectual and economic incentives. The need for such intelligent systems has become more intense in the face of the global connectivity of the internet. There has become an almost insatiable requirement for instantaneous information and decision brought about by this confluence of computing and communication. This requirement can only be satisfied by the construction of innovative intelligent systems. A second and perhaps an even more significant development is the great advances being made in genetics and related areas of biotechnology. Future developments in biotechnology may open the possibility for the development of a true human-silicon interaction at the micro level, neural and cellular, bringing about a need for "intelligent" systems. What is needed to further the development of intelligent systems are tools to enable the representation of human cognition in a manner that allows formal manipulation. The idea of developing such an algebra goes back to Leibniz in the 17th century with his dream of a calculus ratiocinator. It wasn't until two hundred years later beginning with the work of Boole, Cantor and Frege that a formal mathematical logic for modeling human reasoning was developed. The introduction of the modem digital computer during the Second World War by von Neumann and others was a culmination of this intellectual trend.