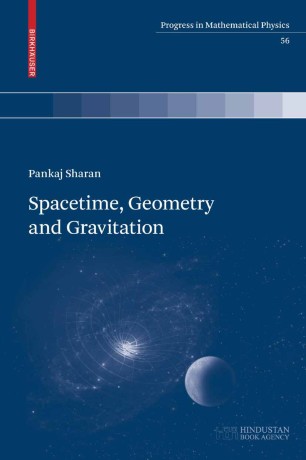 This is an introductory book on the general theory of relativity based partly on lectures given to students of M.Sc. Physics at my university. The book is divided into three parts. The ?rst part is a preliminary course on general relativity with minimum preparation. The second part builds the ma- ematical background and the third part deals with topics where mathematics developed in the second part is needed. The ?rst chapter gives a general background and introduction. This is f- lowed by an introduction to curvature through Gauss’ Theorema Egregium. This theorem expresses the curvature of a two-dimensional surface in terms of intrinsic quantitiesrelatedtothein?nitesimaldistancefunctiononthesurface.Thestudent isintroducedtothemetrictensor,Christo?elsymbolsandRiemanncurvaturet- sor by elementary methods in the familiar and visualizable case of two dimensions. This early introduction to geometric quantities equips a student to learn simpler topics in general relativity like the Newtonian limit, red shift, the Schwarzschild solution, precession of the perihelion and bending of light in a gravitational ?eld. Part II (chapters 5 to 10) is an introduction to Riemannian geometry as - quired by general relativity. This is done from the beginning, starting with vectors and tensors. I believe that students of physics grasp physical concepts better if they are not shaky about the mathematics involved.