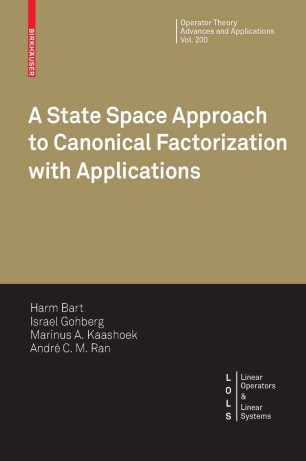 A State Space Approach to Canonical Factorization with Applications

The present book deals with canonical factorization problems for di?erent classes of matrix and operator functions. Such problems appear in various areas of ma- ematics and its applications. The functions we consider havein common that they appear in the state space form or can be represented in such a form. The main results are all expressed in terms of the matrices or operators appearing in the state space representation. This includes necessary and su?cient conditions for canonical factorizations to exist and explicit formulas for the corresponding f- tors. Also, in the applications the entries in the state space representation play a crucial role. Thetheorydevelopedinthebookisbasedonageometricapproachwhichhas its origins in di?erent ?elds. One of the initial steps can be found in mathematical systems theory and electrical network theory, where a cascade decomposition of an input-output system or a network is related to a factorization of the associated transfer function. Canonical factorization has a long and interesting history which starts in the theory of convolution equations. Solving Wiener-Hopf integral equations is closely related to canonical factorization. The problem of canonical factorization also appears in other branches of applied analysis and in mathematical systems theory, in H -control theory in particular.