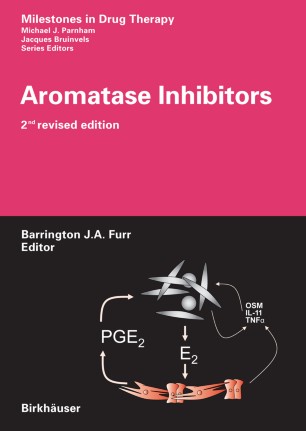 Part of the Milestones in Drug Therapy book series (MDT)

Many breast tumours are dependent upon oestrogen for their development and continued growth. Over the last 25 years hormone therapy has progressed from the irreversible destruction of endocrine glands to the use of drugs that reversibly suppress oestrogen synthesis or action. The inhibition of oestrogen synthesis is most readily achieved by inhibiting the final step in the pathway of oestrogen biosynthesis, the reaction which transforms androgens into oestrogens by creating an aromatic ring in the steroid molecule (hence the enzyme's trivial name, aromatase).
Whereas the first aromatase inhibitors to be used therapeutically could be shown to produce drug-induced inhibition of the enzyme and therapeutic benefits in patients with breast cancer, they were not particularly potent and lacked specificity. However, second-generation drugs were developed and most recently third-generation inhibitors have evolved which possess remarkable specificity and potency. Initial results from clinical trials suggest that these agents will become the cornerstones of future endocrine therapy.