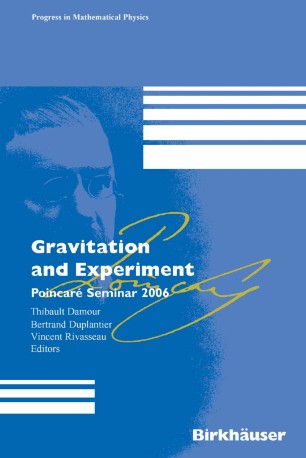 This book is the sixth in a series of lectures of the S´ eminaire Poincar´ e,whichis directed towards a large audience of physicists and of mathematicians. The goal of this seminar is to provide up-to-date information about general topics of great interest in physics. Both the theoretical and experimental aspects are covered, with some historical background. Inspired by the Bourbaki seminar in mathematics in its organization, hence nicknamed “Bourbaphi”, the Poincar´ e Seminar is held twice a year at the Institut Henri Poincar´ e in Paris, with cont- butions prepared in advance. Particular care is devoted to the pedagogical nature of the presentations so as to ful?ll the goal of being readable by a large audience of scientists. This volume contains the ninth such Seminar, held in 2006. It is devoted to Relativity and Experiment. This book starts with a detailed introduction to general relativity by T. Damour. It includes a review of what may lie beyond by string theorist I. - toniadis, and collects up-to-date essays on the experimental tests of this theory. General relativity is now a theory well con?rmed by detailed experiments, incl- ing the precise timing of the double pulsar J0737-3039 explained by M. Kramer, member of the team which discovered it in 2003, and satellite missions such as Gravity Probe B described by J. Mester. The search for detecting gravitational waves is also very much under way as reviewed by J.Y. Vinet. Wehopethatthecontinuedpublicationofthisserieswillservethecommunity of physicists and mathematicians at professional or graduate student level.