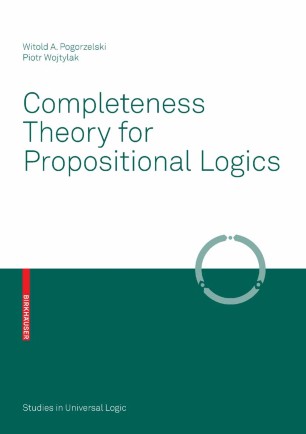 Completeness is one of the most important notions in logic and the foundations of mathematics. Many variants of the notion have been de?ned in literature. We shallconcentrateonthesevariants,andaspects,of completenesswhicharede?ned in propositional logic. Completeness means the possibility of getting all correct and reliable sc- mata of inference by use of logical methods. The word ‘all’, seemingly neutral, is here a crucial point of distinction. Assuming the de?nition as given by E. Post we get, say, a global notion of completeness in which the reliability refers only to syntactic means of logic and outside the correct schemata of inference there are only inconsistent ones. It is impossible, however, to leave aside local aspects of the notion when we want to make it relative to some given or invented notion of truth. Completeness understood in this sense is the adequacy of logic in relation to some semantics, and the change of the logic is accompanied by the change of its semantics. Such completeness was e?ectively used by J. ?ukasiewicz and investigated in general terms by A. Tarski and A. Lindenbaum, which gave strong foundations for research in logic and, in particular, for the notion of consequence operation determined by a logical system. The choice of logical means, by use of which we intend to represent logical inferences, is also important. Most of the de?nitions and results in completeness theory were originally developed in terms of propositional logic. Propositional formal systems ?nd many applications in logic and theoretical computer science.