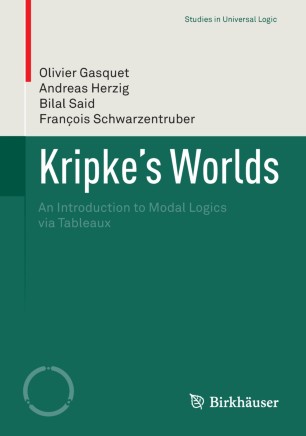 An Introduction to Modal Logics via Tableaux

Possible worlds models were introduced by Saul Kripke in the early 1960s. Basically, a possible worlds model is nothing but a graph with labelled nodes and labelled edges. Such graphs provide semantics for various modal logics (alethic, temporal, epistemic and doxastic, dynamic, deontic, description logics) and also turned out useful for other nonclassical logics (intuitionistic, conditional, several paraconsistent and relevant logics). All these logics have been studied intensively in philosophical and mathematical logic and in computer science, and have been applied increasingly in domains such as program semantics, artificial intelligence, and more recently in the semantic web. Additionally, all these logics were also studied proof theoretically. The proof systems for modal logics come in various styles: Hilbert style, natural deduction, sequents, and resolution. However, it is fair to say that the most uniform and most successful such systems are tableaux systems. Given a logic and a formula, they allow one to check whether there is a model in that logic. This basically amounts to trying to build a model for the formula by building a tree.

This book follows a more general approach by trying to build a graph, the advantage being that a graph is closer to a Kripke model than a tree. It provides a step-by-step introduction to possible worlds semantics (and by that to modal and other nonclassical logics) via the tableaux method. It is accompanied by a piece of software called LoTREC (www.irit.fr/Lotrec). LoTREC allows to check whether a given formula is true at a given world of a given model and to check whether a given formula is satisfiable in a given logic. The latter can be done immediately if the tableau system for that logic has already been implemented in LoTREC. If this is not yet the case LoTREC offers the possibility to implement a tableau system in a relatively easy way via a simple, graph-based, interactive language.

“This is an excellent book to use –– either as a stand-alone text or with another textbook –– for an introductory undergraduate course in logic addressed to majors in the humanities, social sciences, computer science, or mathematics. … A basic unifying theme of the book is to construct models of possible worlds and to check formula satisfiability using graph-theoretic tableaux systems.” (Russell Jay Hendel, MAA Reviews, February, 2014)

“This book provides an accessible introduction to modal logics indeed. … The book is well written and quite informative … . It can be used as an easy-going introduction for all who are interested in automated reasoning and need some formal tools for playing with modal logics.” (Andrzej Indrzejczak, zbMATH, Vol. 1280, 2014)