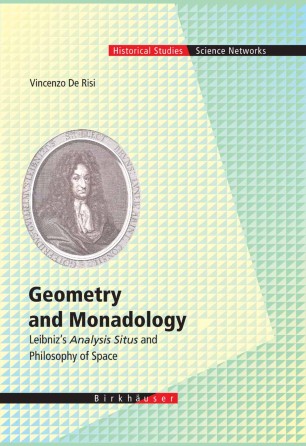 This book reconstructs, from both historical and theoretical points of view, Leibniz’s geometrical studies, focusing in particular on the research Leibniz carried out in the last years of his life. It is indeed the first ever comprehensive historical reconstruction of Leibniz’s geometry that meets the interests of both mathematicians and philosophers. The main purpose of the work is to offer a better understanding of the Leibnizean philosophy of space and mature metaphysics, through a pressing confrontation with the problems of geometric foundations.

Regarding the scope of these problems, the book also deals in depth with Leibniz’s theory of sensibility, thus favouring the comparison and contrast between Leibniz’s philosophy and Kant’s transcendentalist solution. The Appendix references to a number of previously unpublished manuscripts on geometry from the Leibniz Archiv in Hannover, which disclose new theories, points of view and technicalities of Leibniz’s thought.

I find his [De Risi's] contribution to the debate on the reality of corporeal substances to be at once original and decisive. And finally, I am hugely impressed by the expertise he has brought to bear on both the purely formal and the deeply metaphysical sides, each requiring vastly different but equally considerable competences. I am impressed by the original way in which he makes sense of the phenomenalistic strains in Leibniz’s thought by connecting them with the metaphysics of expression, and this in turn with the foundation of real space. In sum, this [book] is an extraordinary accomplishment.

I believe that this is an extraordinary [book] which sets new standards for Leibnizean scholarship—and, in particular, for historical and philosophical investigation into the relationship between Leibniz and Kant.