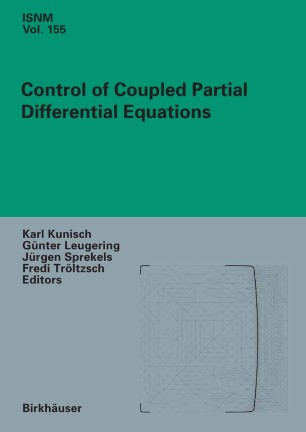 This volume contains selected contributions originating from the ‘Conference on Optimal Control of Coupled Systems of Partial Differential Equations’, held at the ‘Mathematisches Forschungsinstitut Oberwolfach’ in April 2005.

With their articles, leading scientists cover a broad range of topics such as controllability, feedback-control, optimality systems, model-reduction techniques, analysis and optimal control of flow problems, and fluid-structure interactions, as well as problems of shape and topology optimization. Applications affected by these findings are distributed over all time and length scales starting with optimization and control of quantum mechanical systems, the design of piezoelectric acoustic micro-mechanical devices, or optimal control of crystal growth to the control of bodies immersed into a fluid, airfoil design, and much more.

The book addresses advanced students and researchers in optimization and control of infinite dimensional systems, typically represented by partial differential equations. Readers interested either in theory or in numerical simulation of such systems will find this book equally appealing.